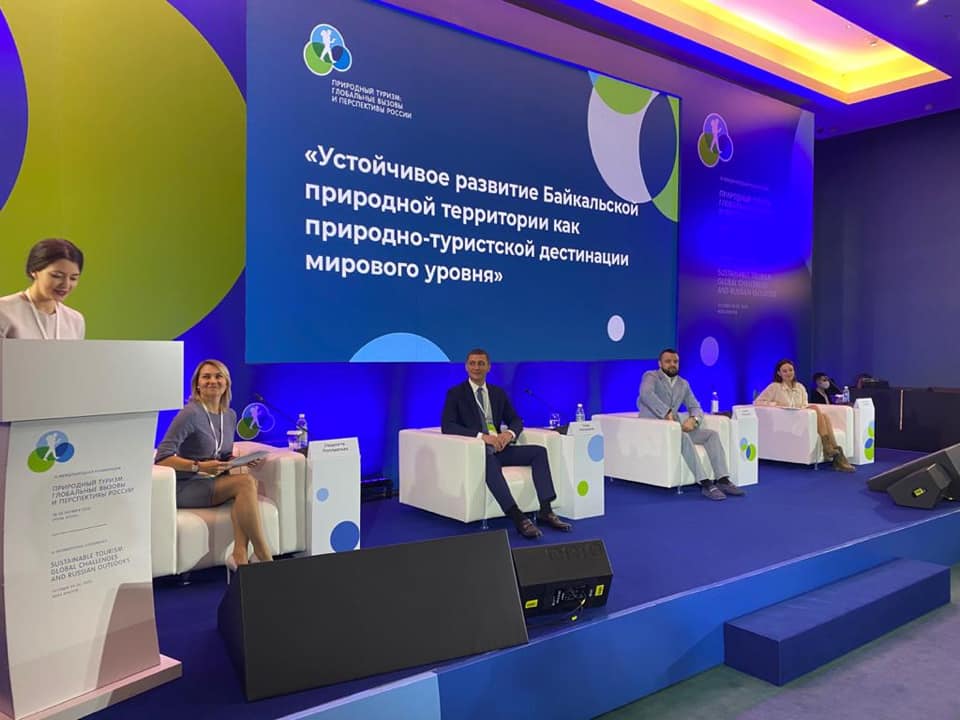 The opening ceremony of the session was attended by Vyacheslav Fetisov, UN Goodwill Ambassador, first Deputy Chairman of the Committee on Physical Culture, Sports, Tourism and Youth Affairs of the State Duma of the Federal Assembly of the Russian Federation. During the welcoming speech, Mr. Fetisov noted the key challenges facing the Baikal natural territory, which, in particular, he summarized during a summer field visit to lake Baikal.

Anastasia Tsvetkova, CEO of the Foundation, continuing her opening remarks to the session, noted that the list of speakers is not accidental. Taking into account the practice-oriented format of the event, representatives of the regulator, the protected area, the business community, and the financial institution were invited to participate. This is done in order to look at the prospects for the development of a specific territory – the Pribaikalsky National Park through the prism of all involved parties. The Foundation was invited by the organizing Committee to moderate the event.

Lyudmila Poplavskaya, Head of the Project Office of the Federal project «Conservation of biological diversity and development of ecological tourism», Ministry of natural resources of Russia, outlined the priorities set by the Ministry in the field of ecotourism development, spoke about the projects that the Ministry is currently taking on support in the Pribaikalsky National Park.

Omar Ramazanov, Director of Federal State Budgetary Institution  «Zapovednoe Pribaikalye» shared cluster approach to the development of Pribaikalsky national Park, presenting investment projects, providing the basic infrastructure on site, and also shared information about inclusive projects and programmes in the field of scientific tourism, which the park intends to develop in cooperation with business and non-profit organizations.

Anastasia Yegorova, founder of the Baikal school of new opportunities «Generation of geniuses», spoke about the launched initiative to create a scientific school in Semenovka valley, which will become a focus of attraction not only for responsible tourists, but also a forge for future professionals in the field of biotechnology. Separately, Anastasia stressed that the development of such projects on lake Baikal will prevent the «tragedy» of Listvyanka.

Artem Mishchenko, managing partner of the National Environmental Operator, presented the «international tourism center» on Olkhon island – a concept of digitalization of the island, which will allow controlling tourist flows and reducing anthropogenic load. The project also includes the creation of visitor centers, checkpoints and other related infrastructure. Artem noted his willingness to share the technology with other protected areas.

Natalia Voloshchenko, Director of Sales Departement of Corporate Customer Sales Department, Bank Sberbank (Baikal division), focused on the ESG agenda, gave many foreign examples about responsible investment and concluded the discussion by calling for synergy of efforts to develop the territory, which should be based on a balanced and environmentally sound approach, strict adherence to the principles of protected areas.

During the discussion, there were also obstacles that each side sees in the development of sustainable tourism in the Baikal natural territory. Anastasia, expressing the position of the Foundation, noted that every decision should be made transparently, and a mechanism of public control is necessary. The moderator also focused on the involvement of the local community and the importance of this aspect in the development of sustainable tourism. The speakers agreed to draft a resolution based on the results of the discussion and submit it to the organizing committee for consideration.

A recording of the broadcast can be viewed on the official event page.