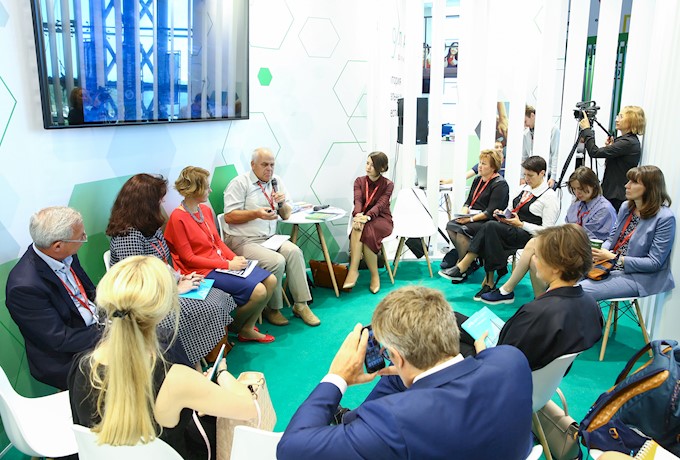 September 11-13, 2018 Vladivostok hosted the fourth Eastern Economic Forum. NGO Laboratory unfolded its work at the Forum. On the one hand, discussions in the Lab were the continuation of search for synergism between business, government and «third» sector like it was in Sochi and St. Petersburg, on the other hand, this search was extended with thematic blocks which are urgent for the host region.

Far East public initiatives were discussed from environmental perspective at the Forum. NGO with different organization structure shared their opinion on animal protection and eco-education projects. The discussion was also moderated by the Head of Lake Baikal Foundation and gathered at the round table representatives of Interregional Public Organization of the disabled «Pilgrim»; «Youth in Government of Primorsky Krai»; Sakhalin regional public organization – Club «Boomerang»; Association «Pharmaceutical Community» and others.

Beside the importance of building the dialogue between the public, government and business, Anastasia Tsvetkova emphasized the necessity of strengthening the ties between NGOs themselves. The participants of NGO Lab agreed to develop cooperation, particularly between environmentalists and scientists, and support their colleagues in the «third» sector.

In conclusion of NGO Laboratory’s business program Anastasia Tsvetkova participated in discussion about the role of women in socio-economic development. During the session the speakers Anna Akparova, assistant to Deputy Prime Minister of Russian Federation – Presidential Plenipotentiary Envoy to the Far East Federal District; Viktoria Panova, pro-rector for international relations at Far East Federal University; CEO of Lake Baikal Foundation Anastasia Tsvetkova; Marina Subbota, Deputy Head of the Government of Kamchatsky Krai, discussed women’s contribution to the development of industries and charity, the priority of professionalism combined with high level of emotional intellect which should be the base of career building backed up with women’s solidarity.

Apart from sharing experience during discussions, the Foundation held a series of meetings devoted to development of its projects’ map. CEO of Lake Baikal Foundation negotiated with representatives of Russian Reserve Centre; with Fyodor Konyukhov’s Foundation «Green Planet» and with potential sponsors of lake Baikal Foundation.

Photo: Roskongress. Streaming from the Forum is available here.