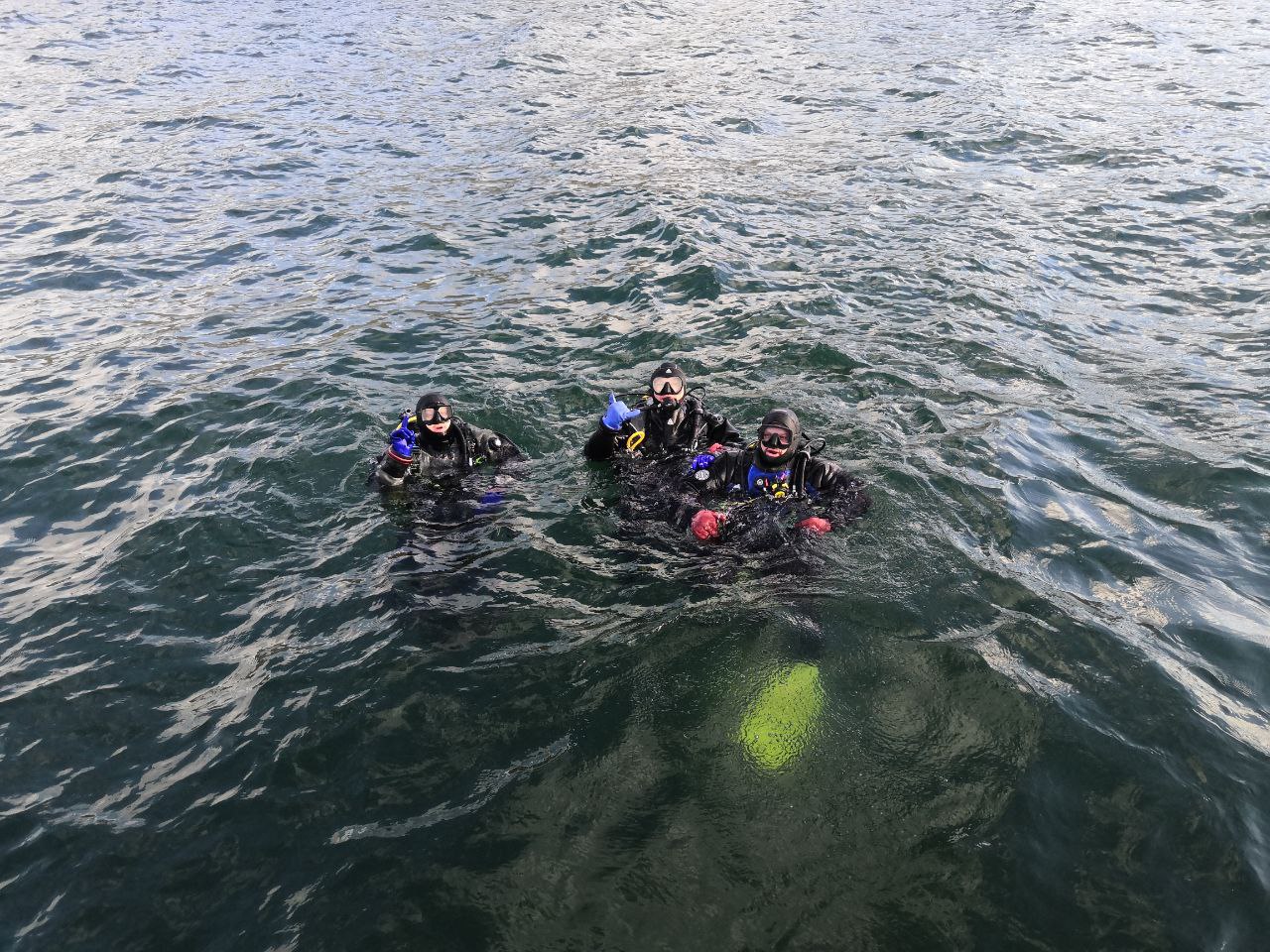 On December 9, 2021, Lake Baikal Foundation organized a round table dedicated to the topic of sunken fishing nets. The round table was attended by 16 specialists from different sectors and regions of Russia. They discussed the reasons for the appearance of sunken networks, the legal regulation of this issue, the visible and invisible consequences of network pollution, as well as approaches to solving this complex problem.

The problem of sunken fishing nets – abandoned, abandoned or otherwise lost fishing gear – is acute all over the world. According to the most conservative estimates of the UN, about 640,000 tons of fishing gear remain in the oceans annually, which is 1/10 of all waste in the ocean. The problem of sunken nets requires an interdisciplinary, systematic approach to its solution. In this regard, representatives of state authorities, the environmental Prosecutor’s Office, science and education, business and the non-profit sector, as well as local residents, representatives of civil society were invited to the dialogue. ‘It was important for us to invite all stakeholders to the discussion. I am very glad that the round table was attended by representatives from the East Baikal Branch of the Baikal Interregional Environmental Prosecutor’s Office, from the territorial Department of Control, Supervision and Fish Protection of the Angara-Baikal Territorial Administration of the Federal Agency for Fisheries, from the Federal State Budgetary Institution «Zapovednoye Pribaikalye». Of course, there were not enough representatives of the waste management sector, as well as manufacturers of biodegradable nets, since several times there was talk about the feasibility of recycling nets and alternatives to nylon nets,’ emphasizes Olga Amelkina, senior Project Manager of Lake Baikal Foundation.

The first session of the event discussed the results of the Baikal Without Nets project, which in 2021 was implemented jointly by the Depth of Responsibility Institute, the Shirshov Institute of Oceanology of the Russian Academy of Sciences and the Lake Baikal Foundation, as well as the results of other similar projects: Vuoksa without Nets, which was presented and implemented by Tatiana Ivanova and Polina Bakunovich, colleagues from the Biologists for Nature Conservation St. Petersburg), and a project on monitoring fishing nets in the shallow waters of the Rybinsk reservoir, which was presented by Dmitry Sadokov, coordinator of the Association in the field of ecology and Environmental Protection «Separate Collection» (Cherepovets).

The problem of sunken fishing nets is relevant throughout Russia. However, the situation is different everywhere: in some places, sunken nets predominate, in others there are a lot of nets washed ashore, somewhere only amateur nets, nylon «Chinese» or «finks» are found, and somewhere there are more dense fishing gear designed for industrial fishing. Therefore, the methods of work on different reservoirs should also be different. The main cause of the problem remains common – poaching.

A representative of Rosrybolovstvo, an agency that deals with the protection of reservoirs, complains about the violation of current legislation, according to which the use of nets for amateur fishing is prohibited throughout Russia, with the exception of the regions of the North, Siberia and the Far East. In these territories, amateur fishing with nets is possible, but must be carried out during established periods and with preliminary registration and marking of the fishing net. A special regulation has been established in relation to the Baikal fishery basin, which completely prohibits the use of any nets in amateur fishing. However, in reality, amateurs fish on nets, while among them there are few who mark these nets, and, of course, no one will admit if they lose their net. The import of fishing nets from China remains a problem, despite the legislative ban on the import of nets made of synthetic materials to the territory of Russia. Dmitry Verkhozin, acting senior State Inspector of the Territorial Department of Control, Supervision and Fish Protection of the Angara-Baikal Territorial Administration of the Federal Agency for Fisheries, notes that there are not enough inspectors in their staff to be able to stop every offense. The situation is further complicated by the fact that the procedure of administrative proceedings for one found network lasts about six months, during which, as a rule, the absence of the owner of the network is established, and the administrative case is terminated. But that’s not all: in order to destroy the network, it is necessary to recognize the network as ownerless in court and then transfer it to the Federal Property Management Agency, which is engaged in the destruction of the network. The Environmental Prosecutor’s office agrees with the argument that the procedure for the discovery of a sunken fishing net is unnecessarily formalized.

The representative of the East Baikal branch of the Baikal Interregional Environmental Prosecutor’s Office, Environmental prosecutor Alexey Koshelev, focuses on gaps in legislation that create difficulties in practice: “Firstly, it is the lack of a clear legislative consolidation of the status of «ownerless fishing nets». The legislation does not answer the question when an abandoned net is property and when it is waste. In its practice, our prosecutor’s office proceeds from the fact that the net is property as long as it is in the water and continues to perform the function of removing fish from the reservoir. If the network is torn off and lies at the bottom, then it ceases to perform its direct function. In this case, I believe the network is already a waste.” The introduction of the concept of «ownerless fishing nets» and criteria for classifying a sunken fishing net as «waste» would reduce the production time after the discovery of a fishing net.

In addition, there are no regulations restricting the sale of fishing nets to amateur fishermen. Alexey Koshelev, Environmental Prosecutor of the East Baikal Branch of the Baikal Interregional Environmental Prosecutor’s Office, summarizes: ‘A regulatory act is required that would regulate the rules for the sale of nets to amateur fishermen. It is possible to impose restrictions on such sales, licensing of this activity. It is probably necessary to follow the path of regulation established in relation to the circulation of civilian weapons in order to ensure effective state control over the sale of fishing nets.’

The heated discussion of legal regulation is replaced by an equally acute agenda – the consequences of «network pollution». In addition to the obvious consequences caused by sunken nets – the death of underwater inhabitants, land animals and birds (if the sunken net was thrown ashore) – there are several non-obvious effects. These are ecosystem changes, accelerated development of algae, «overseas» phenomena, the disintegration of networks into microplastics, the formation of toxic cyanobacteria, a reduction in the number of nests of the Baikal yellowfin goby, whose larvae are the main food for young omul, and more. This was told at the round table by scientists from the Shirshov Institute of Oceanology of the Russian Academy of Sciences, the Institute of Ecology and Evolution. Severtsov RAS, St. Petersburg Scientific Research Center for Environmental Safety of the Russian Academy of Sciences and Lomonosov Moscow State University.

‘A nylon fishing net is a harmful product made of a polymer that is not the safest for nature, plastic, which, getting under water and lying on the bottom at shallow depths, begins to gradually collapse under the influence of ultraviolet sunlight, fluctuations in water temperature, as well as with the physical participation of diatoms and other microalgae fouling the network. In addition, diatoms inhabiting the surface of the fibers of the net, dying, produce and release into the environment an odorous oil that attracts fish and other aquatic organisms into the net trap. These inhabitants of the waters become entangled and subsequently die in the nets, which activates the processes of rotting in them and under them,’ says Philip Sapozhnikov, PhD, senior researcher at the Shirshov Institute of Oceanology of the Russian Academy of Sciences.

Continuing the topic of ecosystem changes caused by sunken fishing nets, Ivan Marin, PhD, Senior Researcher at the Institute of Ecology and Evolution named after Severtsova RAS, gives a vivid example from American practice: ‘Once the Americans decided to create artificial reefs from used tires. But after some time they realized that the tires had just disrupted the circulation of water, and stagnant water was formed inside them, where animals that got there, for example, hermit crabs, died. Also, the tires were covered with unusual algae, the balance of the ecosystem was disturbed, which led to an ecological catastrophe. It must be remembered that plastic is not a natural substrate. Getting into the ecosystem, it also provokes the development of such processes.’

During the work of the round table, different approaches to solving the problem of «network pollution» were expressed. Some experts spoke about the need for legislative improvement regarding the introduction of the concept of «ownerless fishing nets» and the introduction of criteria for the transfer of a fishing net from property to waste, as well as restrictions on the sale of nets for amateur fishermen. Others spoke about the need to follow the example of the European Union in introducing expanded liability for producers of fishing nets (ROP). A proposal was made to expand the boundaries of protected areas at the expense of water areas so that the inspectors of protected areas could exercise control on the water and stop poaching. Emphasis was also placed on the importance of educating and involving volunteers, activists and local residents to explain the rules of fishing, legal responsibility and the consequences of abandoned fishing nets. Suggestions were made on non-material incentive measures for the recovery of sunken nets, the possibility of reporting discovered nets to the inspection authorities (including anonymously), the installation of special tanks for collecting nets and then sending them for recycling, about eco-design of fishing nets and much more.

Currently, the staff of Lake Baikal Foundation is preparing a collection of abstracts based on the results of the round table with a detailed presentation of the material. Subsequently, the work will continue in the context of the development of a resolution to address the problem of sunken fishing nets.