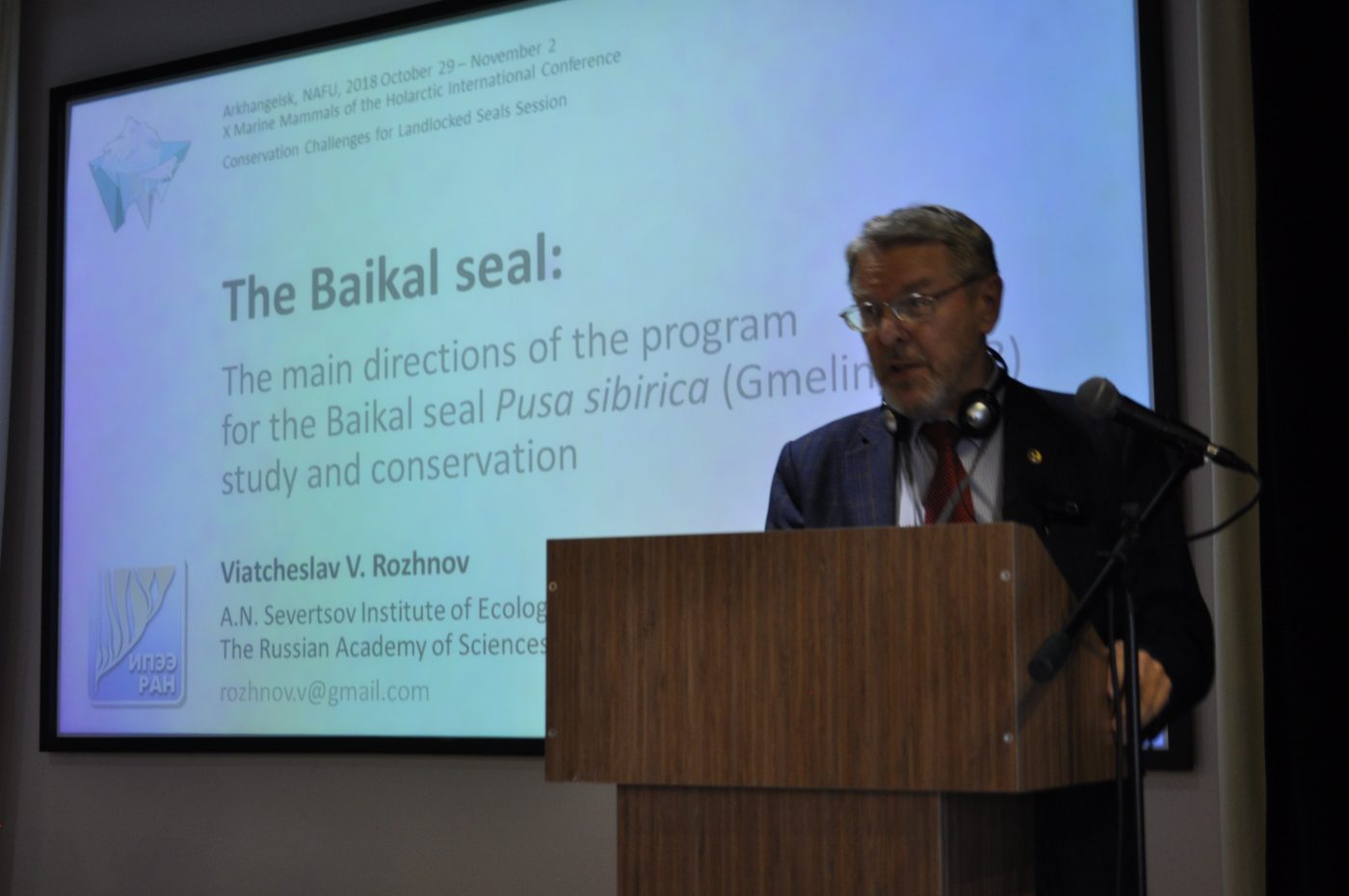 October 29 – November 2, 2018 Arkhangelsk saw 10th International Scientific Сonference «Marine mammals of the Holarctic» in memory of professor A.V. Yablokov. November 1, in the framework of the Conference the participants held a discussion on the state of seals’ population in closed water bodies, including the Baikal seal – an endemic species of the deepest freshwater lake in the world. This event was organized with support of expert-consultative working group of A.N. Severtsov Institute for Ecology and Evolution of RAS and University of Leeds (UK) backed by Lake Baikal Foundation for Environmental Applications and Research, Marine Mammals Council, Theriologic Community of RAS. Russian and overseas experts participated in the section.

During the conference member of the Academy of Sciences, head of A.N. Severtsov Institute for Ecology and Evolution of RAS Vyacheslav V. Rozhnov presented the Guidelines to the program on research and preservation of the Baikal seal worked out at the initiative and with the support of Lake Baikal Foundation. It is worth noting that the Foundation drew attention to the Baikal seal issue in 2018 when the media started to talk about possible resuming of industrial Baikal seal hunting. It came clear that the seal needs being thoroughly studied because its eradication would lead to enormous risks for the whole Baikal ecosystem. The Foundation defended the need to start a program on studying and research of the Baikal seal in front of the scientific community and federal environmental organizations.

CEO of Lake Baikal Foundation Anastasia Tsvetkova: «Apart from the scientific aspect of studying the Baikal seal it is important to institutionalize the research at the state level. Unfortunately, none from the state sector looks at this issue sufficiently at the moment, whereas preservation of the Baikal seal population is essential for sustainability of the whole Baikal ecosystem and for perception of the processes occurring in it».

The Guidelines to the program contain various methods of evaluation of the species’ state, studying the habitat, socio-economic research of illegal hunting, etc. The scientists discussed prospective research and worked out the final paper which would be presented in Russian ministries and departments and will serve as a base for continuing research of the Baikal seal and for implementing ideas on its preservation.

«In my opinion, first and foremost comes quantifying the Baikal seal», says director of the «Baikal Seal Aquarium» Evgeny Baranov. We should put emphasis on the fact that if new methods of the species census are successful, they could serve as models for verification and development of such methods in other water bodies. In this respect the Baikal is a perfect ecosystem with simple food chain. Hydroacoustic method would serve best here because the Baikal seal lives sedently in water areas with great depth. As a metering method of counting we can develop a hydroacoustic method. For example, we can count the seal with hydroacoustic method and den counting method and then compare the results».

Vladimir Peterfeld, director of the Baikal branch of State Budgetary Institution «Gosrybtsentr», gave his expert opinion pointing to the importance of development and implementation of alternative counting methods for the Baikal seal. «Applying new methods will allow to obtain new data about population numbers. We apply yet the only method implemented on the Baikal in 1970s, the method was approved at the International Conference on Methods of the Ice Seals’ Census» (Report of the ICES/NAFO, 1993) and nobody has counted the Baikal seal other way until the present day. In regard of recent rise of attention to the Baikal endemic species, the issue of its quantity and definitive number for the lake is first and foremost,» – comments the director of «Gosrybtsentr».

During the discussion the participants also gave practical recommendations and made additions to the scientific program. Nina Ryadinskaya, Doctor of Biology, specialist in anatomy, physiology and microbiology of seals in Irkutsk State Agrarian University came up with a proposal to add points which touch upon pathoanatomical research: «We prepare specialists in marine mammals, particularly in the Baikal seal. It is remarkable that we are working on such program now. It includes very important research. I would like to add that pathoanatomical dissection of dead animals is impossible without consistent and confirmed rules and norms. We have started to work on them. We are finishing the Anatomic Atlas and other works. Last year we saw mass death of 130-200 Baikal seals. We studied dead animals together with Veterinary Department of Republic of Buryatia, Limnological Institute of SB RAS, Irkutsk Scientific Antiplague Institute of Federal Service for Consumer Rights Protection and Human Welfare, Veterinary Department of Irkutsk region. No infection diseases were found, but the detected antigens against adenoviral infection and parvoviral enteritis show that in past the seals had caught these infections. The tests showed that the animals died from asphyxia and cardiac failure. We still have to find out what caused the seals’ death, that is why this program is very timely».

Alexander Alexeev, PhD in biology, specialist in pathogenesis of infection diseases of Federal Research Center of Fundamental and Translational Medicine: «I would like to point out that the list of standard methods will not be unamended instruction for the scientists, it will be a list of recommendations which allow to generalize existing data and to validate it. Application of new methods and approaches is not being limited, on the contrary, it is desirable. Recommended protocols should be corrected from time to time, for example, at every conference «Marine Mammals of the Holarctic» we should make amendments. It is also essential to organize comprehensive expeditions with researchers who specialize in various fields. The more diverse gathered material is, the more comprehensive data we obtain from each location of research».

Other researchers also participated in the section. Professor from the University of Tokyo Miyazaki Nobuyuki, who dedicated more than 20 years to the research of the unique animal, presented his report. The report included the results of Russian-Japanese expedition observing the Baikal seals’ behavior under water with the use of breakthrough technologies. Director of the Baikal Seal Aquarium, Irkutsk region, Evgeniy A. Baranov, PhD in biology, presented new methods of studying the Baikal seal which exclude animals’ death.

Lake Baikal Foundation will prolong strong partnership with scientific community, authorities and the public for studying and preserving the Baikal seal population. The next step will be implementation of the program. In 2019 with support of the Foundation specialists from Institute for Ecology and Evolution of RAS, Federal Fishing Agency and Federal Specially Protected Environmental Area «Zapovednoye Podlemorye» will perform tagging the Baikal seals with satellite radars and will hold related research on the Ushkanyi islands.