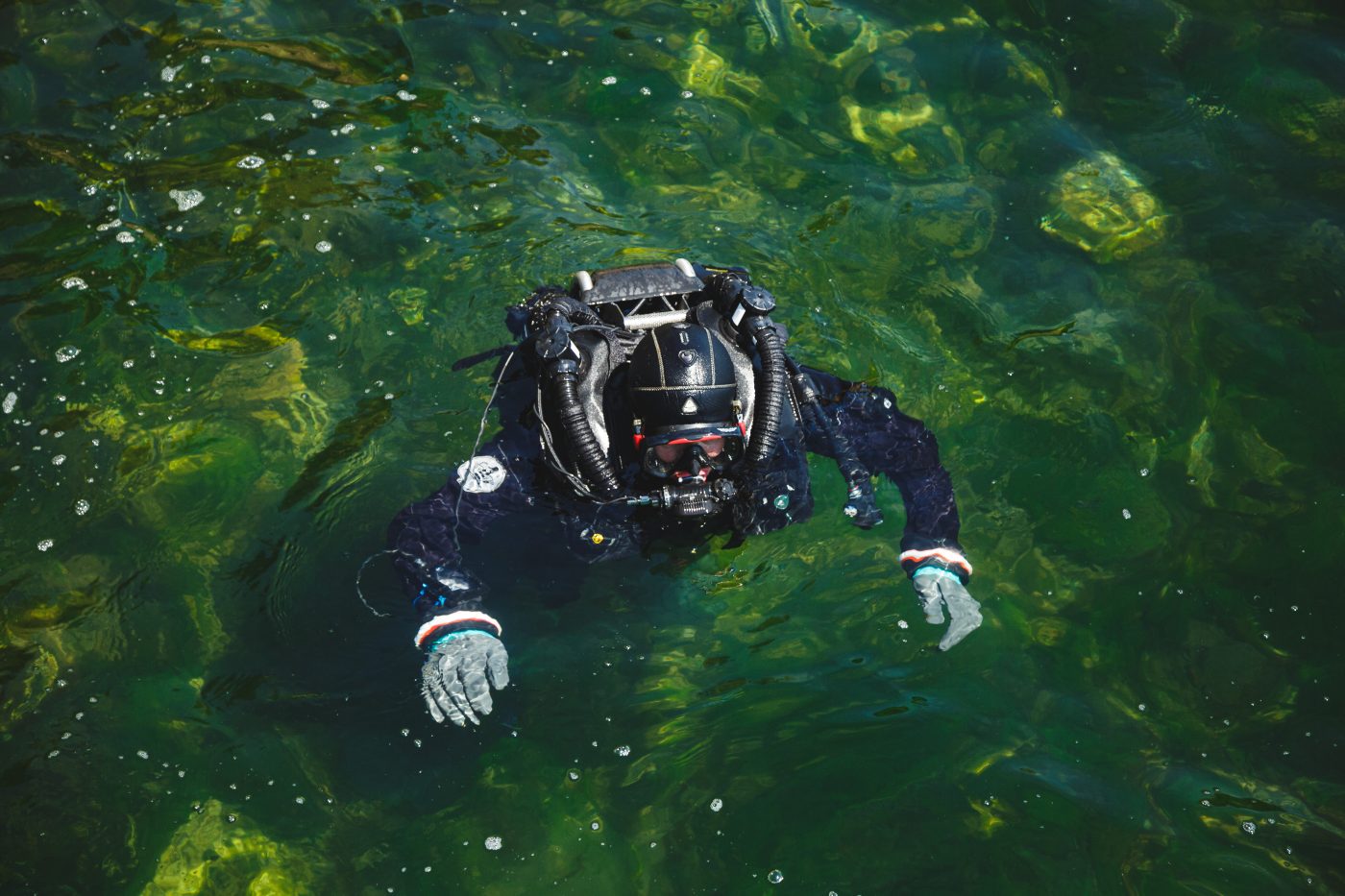 The first stage of an independent research expedition within the framework of the Baikal Without Fishnets project has been completed. The expedition which lasted 12 days united representatives of the Baikal Interregional Environmental Prosecutor’s Office, the Angara-Baikal Department of the Federal Agency for Fisheries, inspectors and managers of coastal protected areas, scientists from the Shirshov Institute of Oceanology of the Russian Academy of Sciences, representatives of civil society and the media. The expedition boat started from the village of Listvyanka and headed along the eastern shore of the lake, passed the Strait of the Small Sea, skirting the island of Olkhon, proceeded to the eastern coast in the Chivyrkuy Bay, then to Maksimikha, through the Gulf Proval and back to Listvyanka.

Professional divers performed several dives in order to identify sunken fishing nets and raise them to the surface for further disposal. Similar work was carried out from a boat using an underwater video camera. Thousands of entangled crustaceans from the amphipod group were found in the raised nets. Many of them are orderlies of Lake Baikal, because they feed on carrion. Often, eating carrion from sunken nets, for example, fish, they get entangled and die in them themselves. This leads to the attraction of other cadaverous crustaceans, which, in turn, also get entangled in the network. Gradually, there are more and more of them.

In one place, a fishing net was found, which, unfortunately, could not be lifted. Firstly, fishing nets are initially very large, and due to the overgrowth of algae, they become even heavier. Alexander Krasovsky, the head of the expedition, the president of  the Irkutsk Regional Environmental Non-governmental organization «Depth of responsibility», notes that there are special techniques for lifting fishing nets: two links of divers raise the net to the surface, cutting and winding the net in parts, while trawling causes great harm to the ecosystem of the lake. The fishing net could not be lifted for another reason: divers noted that when touched, the net began to crumble into microparticles (microplastics). Philip Sapozhnikov, a specialist at the Institute of Oceanology of the Russian Academy of Sciences, explains this by the fact that diatoms that begin to develop on the surface of sunken nets actively inhabit microcracks on the surface of the network fibers and provoke further processes of their destruction. This is due to the proliferation of colonial algae settlements, in which the cells are dressed in slightly deformable shells of silicon oxide, and when they multiply, the cracks expand, deepening into the thickness of the synthetic fiber. A special role in these processes is also played by sunlight (photooxidation of plastic) and the movement of water in the bottom layer.

The dives were also performed by scientists from the Institute of Oceanology of the Russian Academy of Sciences, but for the purpose of visual observation of the state of the lake’s aquatic ecosystems and sampling of water at the points of localization of networks and in water clean from network pollution, selection of biomaterials from the fouling of networks and fragments of the sunken networks themselves. Philip Sapozhnikov says: «Using the methods of observations on underwater routes made using light diving equipment with the use of video recording of the change of landscapes with depth, as well as the analysis of fragments of networks selected by depth using light microscopy, the change of cyanobacteria-fouling complexes was established against the background of an increase in the depth of localization of networks. In particular, it was found that the composition of cyanobacteria that colonize the surface of networks changes with depth. Thus, up to a depth of 9-10 meters, the nets are overgrown mainly with mucous colonies of cyanobacteria from the genus Nostoc and some filamentous forms of gray-green and green colors. A little deeper, already at 11-12 meters, the structural basis in the fouling is formed by filamentous cyanobacteria with red, crimson, pink, lilac and gray pigmentation, among which species from the genera Lyngbya and Phormidium predominate. The surface of the covers of cyanobacteria and nylon fibers is colonized here by diatoms developing in mass, but the structure of their communities on these substrates differs significantly. When rising from the water, such nets emit a strong, unpleasant smell. Overgrown with cyanobacteria, sunken nets form a dense blanket on the bottom surface, which prevents the passage of sunlight. In view of this, the so-called “overseas” phenomena arise, i.e. the mass extinction of representatives of the bottom flora and fauna under the «carpet» from the nets due to a decrease in the concentration of dissolved oxygen in this zone».

The primary data of analyses of samples of algae communities taken from the surface of sunken nets and natural substrates in various locations of the coastal zone of the lake, performed on board an expedition boat by vital microscopy methods, allow us to draw conclusions not only about the possibilities for different types of colonization of nets in different areas of Lake Baikal, but also those large-scale changes in algae communities that have taken place in recent years. In the near future, the obtained samples and new data will be studied in more detail in the laboratory of the Institute of Oceanology of the Russian Academy of Sciences, after which it will be possible to provide more detailed information about these phenomena.

A separate selection of water samples and biomaterials from the surface of sunken fishing nets will soon be sent to the St. Petersburg Scientific Research Center for Environmental Safety of the Russian Academy of Sciences to identify the entire spectrum of cyanobacteria that grow in nets, and, most importantly, to identify their toxicity. Only after receiving the results of all scientific research will it be possible to draw a conclusion about the damage caused by sunken nets to the ecosystem of Lake Baikal.

The participants of the expedition came to the conclusion that the situation with network pollution on Lake Baikal is not uniform. There are favorite places of fishermen, where it is very easy to find a net – it is enough to dive even to small depths. In other areas, there are difficulties with detecting nets: due to the strong current, the net can be twisted into a bundle and just lie on the bottom, which makes it hardly noticeable. Only an experienced diver or diver can detect such a network. In some places, positive dynamics was noted: control on the water in order to prevent poaching and amateur fishing with nets, as well as regular measures to clean the lake from sunken nets had a beneficial effect on the state of the bottom – at such points, sunken fishing gear was either not found at all, or they were in small quantities. However, there are also areas where the cleaned underwater landscapes are again covered with nets in 2-3 days, as in the case of Big Cats, Alexander Krasovsky notes. All these nuances are recorded and will be reflected in the network pollution map, which will be compiled following the results of the second stage of the expedition. In addition, analytical studies on the problems of network pollution and the applied preventive measures will be carried out, regulatory documents will be analyzed, and the experience of foreign countries will be studied.

Currently, the second stage of the expedition is planned, which should take place before the end of September 2021 and cover the impassable water area of the lake. At this stage, scientists from the Institute of Oceanology of the Russian Academy of Sciences will also take part in the expedition, but in a more expanded composition.

Recall that the independent research expedition is part of the Baikal Without Fishnets project. It was organized by the Irkutsk Regional Environmental Non-governmental organization «Depth of responsibility», Lake Baikal Foundation and the Shirshov Institute of Oceanology of the Russian Academy of Sciences. The project is being implemented thanks to the financial support from the partners of Lake Baikal Foundation — Henkel Company and the World Around You Foundation of the Siberian Wellness Corporation, as well as thanks to the victory of Lake Baikal Foundation in the grant competition for non-profit organizations «Support Will Come», held jointly by Tinkoff Bank and the Foundation «Help Needed». If you are interested in cooperation or financial support for the Baikal Without Networks project, please contact any of the parties to the project.