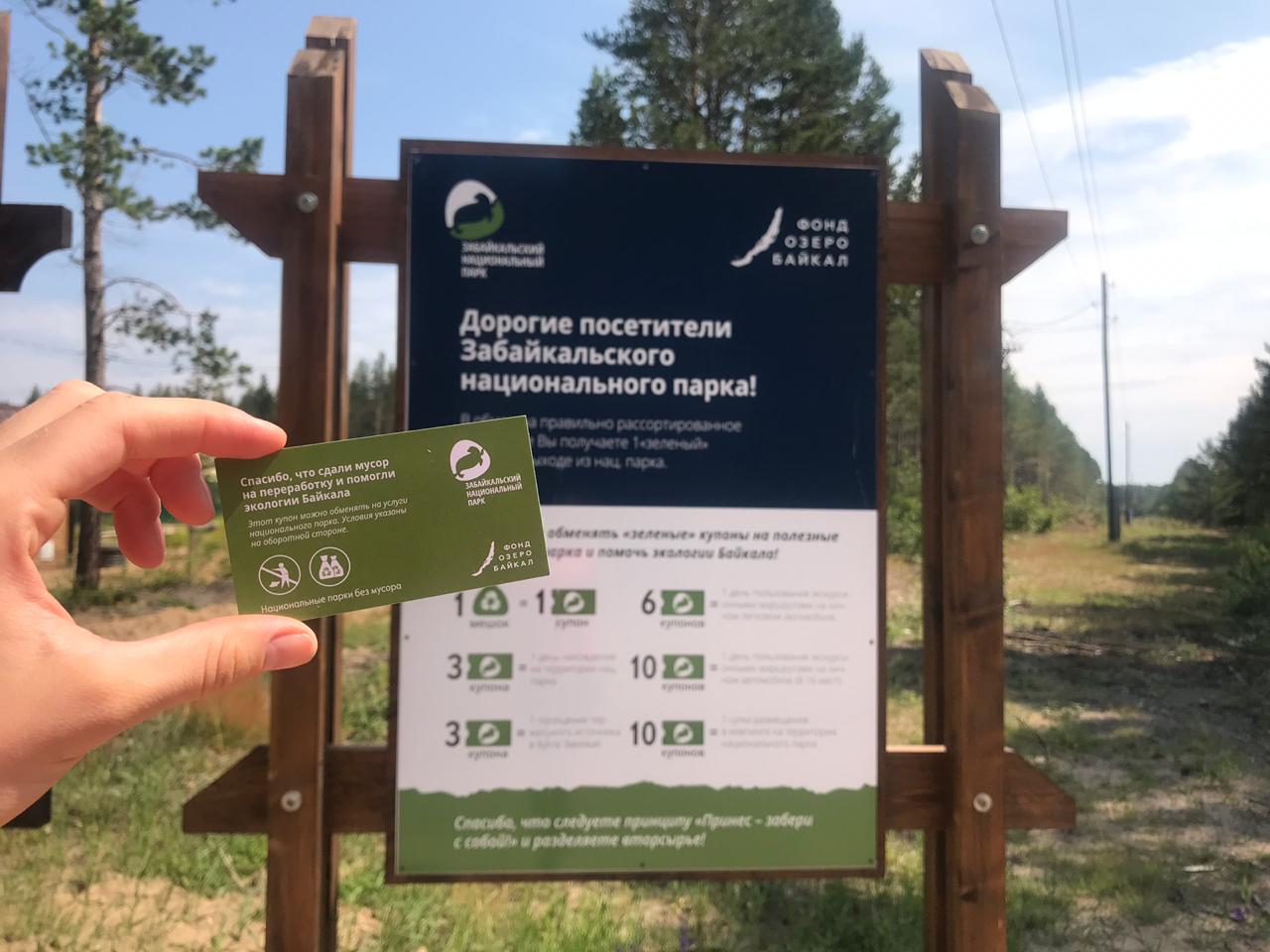 The first stage of the pilot project «Trash Free National Parks» has been concluded in September 2019 in Zabaikalsky national park. The project was initiated by Lake Baikal Foundation with the aim to improve the waste management system in the natural protected area, to implement environmentally responsible practices according to the UN Sustainable Development Goals. The project received financial grant support from the Presidential Grants Foundation in amount of 4,9 million rubles.

According to the new rules established in Zabaikalsky national park, visitors should either carry out all waste or select garbage and dispose of it strictly at the special recycling points. A remarkable feature of the project is a motivating program of green tickets for the visitors: in exchange for correctly selected and responsibly diposed waste tourists receive tickets for free access to some facilities of the national park. Volunteers and employees of the protected area help visitors to adapt to the new system.

A distinctive important part of the project is scientific research on morphology, logistics, dynamics of waste generation in the national park. The data is essential for further optimization of accumulation, transportation and recycling of waste on the territory of the park.

First results of the project in facts and figures:

55 cubic metres of recyclables was transported to Ulan-Ude for further sorting by the company «Baikalecoservice», after that it was sent to the Russian recycling plants. The company and the national park signed an agreement of beneficence.

37 volunteers, including 15 students of ecology faculties of Russian universities, participated in the project during the summer 2019.

10 000 people (including visitors and employees of Zabaikalsky national park, as well as local population of the settlement of Ust-Barguzin) were informed about the new rules of waste management in the national park («Carry in – Carry out» principle and selective garbage collection).

From 31 July to 10 August 2019 the experts from the East Siberia State University of Management and Technology, the Irkutsk National Research Technical University and students of corresponding faculties managed by the international expert from Switzerland Olga Ulanova held field research in Zabaikalsky national park and analyzed the volumes of accumulation of waste and its composition, took samples of garbage for laboratory analysis, etc. The main result of the work will be a responsible waste management concept for the particular area – Zabaikalsky national park.

Positive feedback on the implemented system was most often received by the visitors from Europe and the South Korea. They were pleased to take questionnaires and bags, recognized the symbol of recycling on the information boards, selected garbage.

The further plans of Zabaikalsky national parks and Lake Baikal Foundation include the following measures:

• The employees at the entering point of the national park will continue cooperation with the visitors calling them for following the rule «Carry in – Carry out» and will control the state of the trash bins.

• To improve the fitout of the recycling points considering the conclusions of the summer season 2019.

• To install recycling bins in the administration building of the national parks so that the employees could bring recyclable from their homes and dispose of it responsibly.

Lake Baikal Foundation is preparing to present the results of the next stage of the project – research on waste morphology in Zabaikalsky national park.