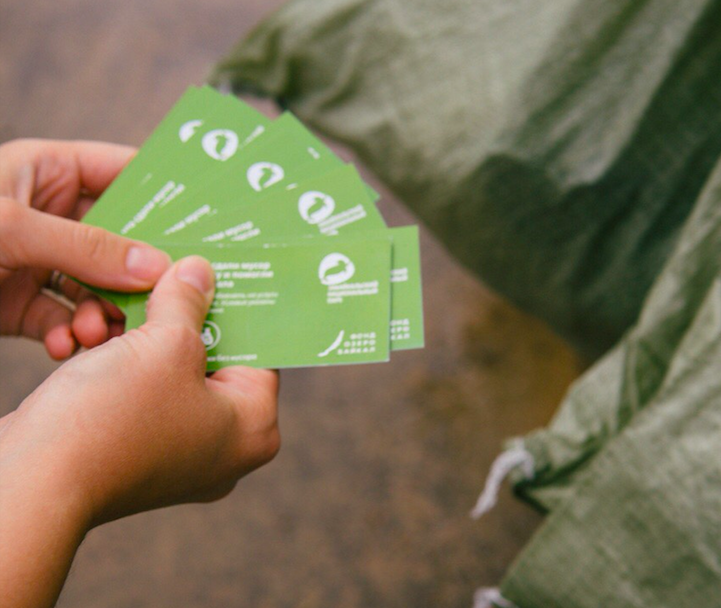 How to make communication between national parks and their visitors more environmentally friendly? To what extent is the recreational behavior of people on vacation compatible with the environmental approach to garbage and waste? In order to find answers to these questions and collect complete information on waste management practices in the national parks, The Lake Baikal Foundation for Environmental Applications and Research conducted a study on its own initiative in the Zabaikalsky national park in summer 2019. The research results are reflected in the report prepared for the Foundation by Anastasia Lavrentieva and Ivan Klimov, representatives of Social Business Group in the framework of pro bono cooperation.

An action group formulated a number of research tasks: whether it is possible to estimate the proportion of visitors with already formed environmental habits? The extent to which existing infrastructure for separate collection of waste is visible and easy to use by visitors to the national park? Is it possible to describe any of the most common «patterns of environmental behavior» ? The survey was conducted from 1 to 7 August 2019 on the territory of the Zabaikalsky national park — in the villages of Ust-Barguzin and Kurbulik, in campsites and camp sites of the ChivyrkuyskyBay.

Analysis of the research results showed that 82% of visitors did not take with them things that would then be thrown away in the national park, 53% of them used containers for separate waste collection, 32% of respondents said they had not seen containers for separate waste collection and 15% of them did not use them even if they were available. 90% of visitors took a reusable bottle/container with them when going to the national park, 74% of them had no difficulties with garbage sorting (plastic, glass, metal, food waste) while on the territory of the national park. Respondents noted that they initially thought through a set of things, food, dishes, taking into account a more rational and careful attitude to the nature of the Park, prepared to take their garbage with them.

The report emphasizes that the availability and convenience of infrastructure for separate waste collection largely determines whether visitors to the Park would not only use containers and also learn the norms of more environmentally friendly behavior and plan in advance the need and possibility of sorting their garbage during the vacation. According to the survey, three quarters of visitors (76%) consider the infrastructure created for separate waste collection in the Zabaikalsky national park convenient and understandable.

To conclure, the authors of the report note that at the moment the culture of visiting national parks and reserves is formed in accordance with the values of environmental conservation. According to the survey, the proportion of visitors to the Park positively related to proenvironmental practices is quite high: 90% of respondents have ever taken a reusable bottle/container, going to a national Park; 87% of them believe it could be done without disposable packaging in the national Park.

There is a certain problem in the implementation of separate waste collection: 15% of respondents do not use containers even if they are available. It can be assumed that this is due to the low level of confidence in the system of waste processing in the country as a whole and the collection of recyclables in the territory of the national center. parks in particular. Despite the difficulties, there are more and more opportunities for separate waste collection and formation of ecotourism in protected areas such as in the Zabaikalsky national park!

The Lake Baikal Foundation thanks Social Business Group for cooperation in the framework of the «Trash Free National Parks» program.

During the summer about 20,000 people, an average of 1,600 people a week have visited the Zabaikalsky National Park. Most visitors to the Park were from Buryatia, many residents of other Russian cities and relatively few from other countries. Foreigners were represented by mainly organized tourists (in groups with a pre-laid route and a guide). At the time of the survey there were about 1,000 tourists in the Park. In the points where the survey was conducted there were 300 tourists.

Data collection was carried out with the help of two groups of interviewers. The first consisted of two volunteers, they were constantly present at the checkpoint of the national Park in the village of Ust-Barguzin and issued questionnaires, which visitors to the Park had to return filled in on the way back. In the second group, the survey was an addition to the master class on waste management in protected areas. It was held in Ust-Barguzin, as well as field work, which was carried out by a team of experts studying the morphology of waste in the framework of the «Trash Free National Parks» program of The Lake Baikal Foundation. The group worked in Kurbulik and The Zmeinaya Bay, it consisted of 11 people: 8 student volunteers and 3 experts. The group conducted a tour of the area and distributed questionnaires in the recreation areas.