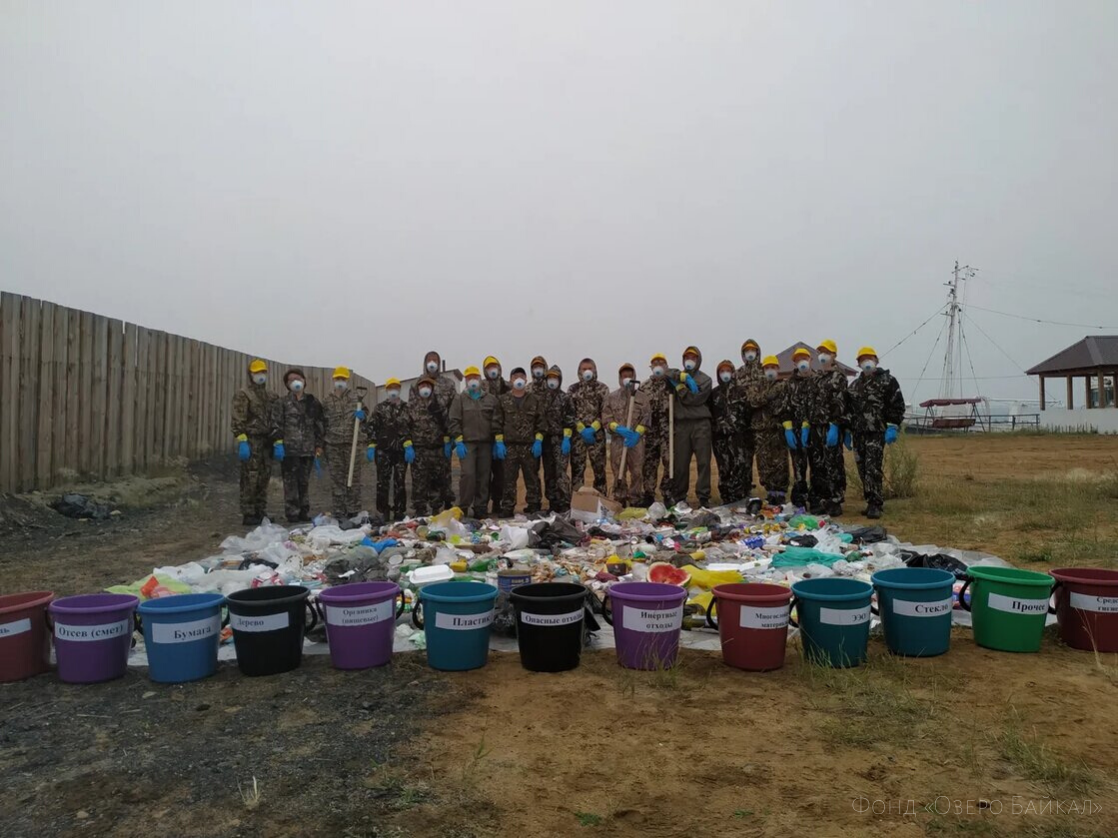 Thanks to the project «Trash Free National Parks» during the tourist season of 2019, 55 m3 of recycled materials (mixed plastic, glass, metal) were sent from Zabaikalsky national park for recycling.

Global Recycling Day is celebrated on November 15 in many countries. The purpose of this day is to attract the widest possible attention to the issues of competent waste disposal which becomes a threat to the ecology of the whole planet. Russia has been celebrating this day since 2014. The Lake Baikal Foundation identified the topic of sustainable waste management as one of the priorities, after which a pilot environmental project «Trash Free National Parks» was developed and implemented. The project was launched on June 5, 2019 and received support from the Presidential Grants Foundation.

According to scientists, the greatest damage to the environment and biodiversity is caused by disposable plastic packaging. According to the study of waste morphology conducted in Zabaikalsky national park within the framework of the project «Trash Free National Parks», plastic packaging waste accounted for 11% of the total volume of solid municipal waste accumulated in the national park for 4 days — it is about 72 kg of disposable bags, plastic bottles, food containers, soft packaging made of polypropylene, disposable polystyrene dishes. Accordingly, in a week during the peak tourist season on the territory of the national park about 130 kg of waste polymers were formed and for the year this figure is about 6 tons.

Terms of decomposition of various types of plastic in nature — from 100 to 1000 years. It accumulates uncontrollably in water and on land, breaks down into microplastics and becomes part of food biological chains, posing a threat to biodiversity, as it enters the stomachs of mammals and birds.

According to statistics, only plastic bags (so-called «t-shirts») in Russia produce 26-30 billion pieces per year (180-200 pieces per year per person), which is 5% of the world consumption of this type of packaging. Bags are among the main plastic pollutants of natural areas and recreational areas.

Plastic waste can be recycled if there is a system of separate waste collection and proper eco-education of visitors to protected areas. The pilot project «Trash Free National Parks» of the Lake Baikal Foundation is aimed at solving this problem and is designed to create a sustainable system of waste management in Zabaikalsky national park, based on scientific data on the volume and dynamics of waste generation in the territory. The project is based on the principle of «Carry in — carry out, leave no trace». As a result of the project, it is planned to change the ecological consciousness of tourists so that they do not leave garbage on the territory of national parks, but sort it throwing into special containers.

In particular, within the framework of the project, separate waste collection points have been equipped in the busiest points of the national park: containers for separating waste and boards with information on waste sorting have been installed and repurposed. There are 4 types of containers: for glass, metal, plastic and mixed waste. Recyclable materials are exported free of charge by the operator «Baikalekoservice» for the treatment in the Republic of Buryatia. Thanks to the project «Trash Free National Parks» during the tourist season of 2019, 55 m3 of recycled materials (mixed plastic, glass, metal) were sent from Zabaikalsky national park for processing.

— In 2019, the program was very interesting and showed that the project of separate garbage collection has good prospects in our territory. Based on its results, we have made some conclusions and I think that next year we will be able to multiply the results, perhaps with the support of the Lake Baikal Foundation.

It is important to understand that our goal this year was not to organize a full-fledged rapid garbage collection throughout the territory, which is almost impossible, since the park is always a large number of visitors. The main thing is to create a system of methodological education to accustom local residents and tourists to the fact that garbage should be taken with them. Of course, our territory is equipped with special garbage containers but when people take care of themselves the results is different. The experience of last year showed that there are prerequisites for this. Of course there are sone difficulties, we need systematic long-term work but I think that we will succeed.

The volunteers who worked for us have proven themselves and made a significant contribution to the overall result and we thank them very much. An important task was to conduct monitoring to think about how to organize garbage collection and we accomplished this task.