Interview with Julia Lubyaga, manager of the project on the study of the Baikal amphipods using transfected cell lines 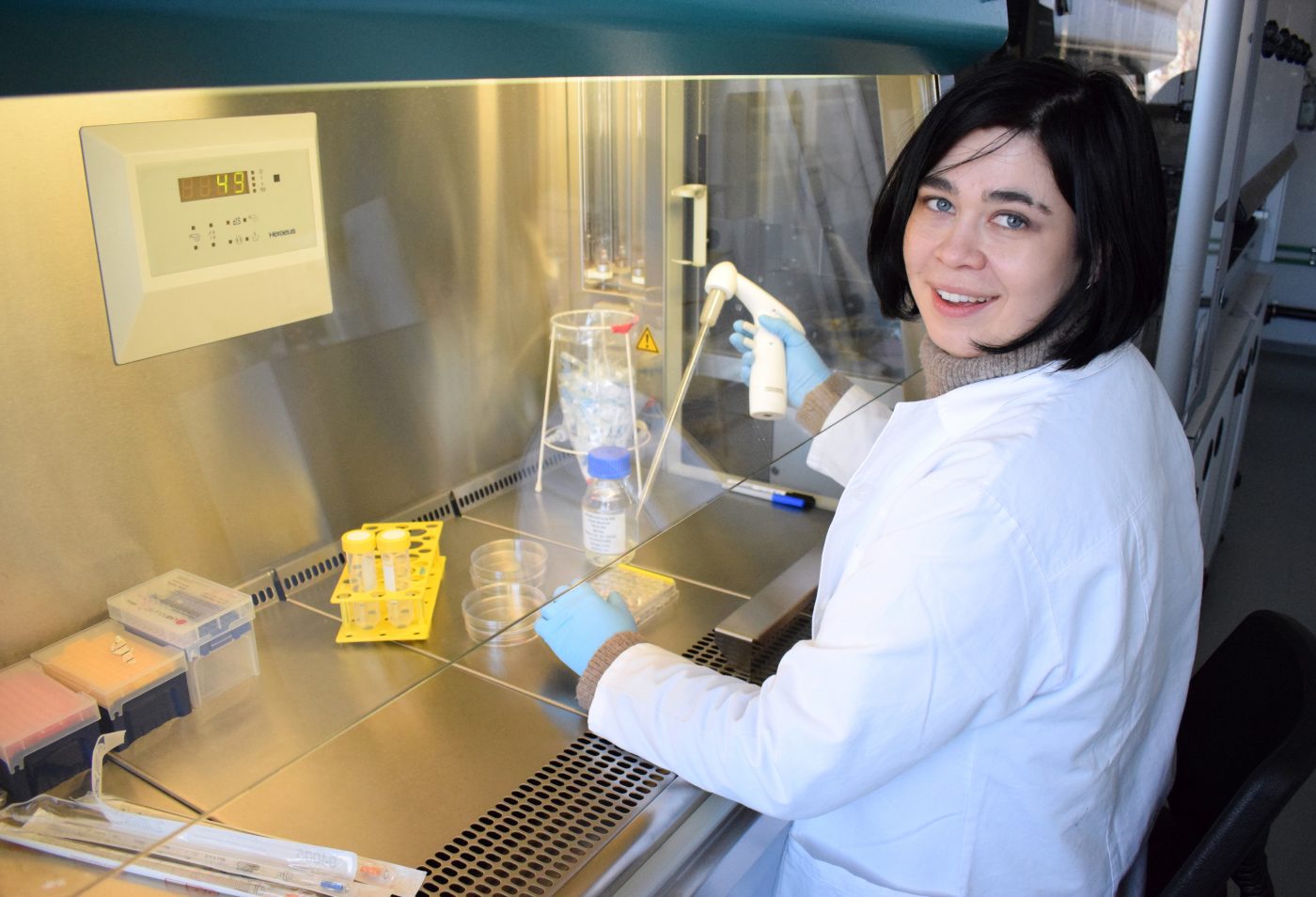 Researchers of the Biology Research Institute of Irkutsk State University have begun their work on a project of using transfected cell lines for environmental monitoring of Lake Baikal. As part of the «Baikal Initiative» competition 2019 supporting young scientists, the Foundation transferred 400,000 rubles for the implementation of this project. The head of the scientific group, Julia Lubyaga, told us about the uniqueness and importance of the new methodology, and shared her thoughts on the need for a systematic approach to preserving Lake Baikal.

What inspired you for this project?

The idea of ​​this project came about after I had the opportunity to work with a transfected cell line for the first time. We got the idea that the expression of the P-glycoprotein protein gene of the Baikal amphipods in cells will enable us to work in vitro with a controlled environment, which is a great advantage in this work and is not feasible on whole organisms. Thus, we will be able to obtain data on the structural and functional characteristics of the protein transporter of the Baikal organisms and test the hypothesis on the sensitivity of this mechanism in connection with the evolutionary features of the development of the fauna of Lake Baikal. And possibly to create then an effective test system for environmental monitoring.

How will the results of the project help the Baikal ecosystem and the scientific community?

First of all, as a result of the project, important fundamental knowledge about the functional and structural features of the P-glycoprotein of the Baikal endemic amphipods will be obtained, which is necessary when creating environmental monitoring techniques based on the use of transfected cell lines. Further development of the project will be aimed at implementing the obtained results in the form of a ready-made test system for predicting the effects of anthropogenic impact on aquatic ecosystems and assessing the degree of resistance to potentially hazardous substances in the endemic organisms of Lake Baikal. This method will open prospects for the development of regulations on threshold limit values (TLV) of substances for the Baikal natural territory. Since currently TLV values ​​are not established for all chemical elements, average values ​​are used for them without considering the characteristics of the reservoir, which, undoubtedly, can negatively affect the health of the lake.

Has anyone done such research before you, perhaps abroad? What is the uniqueness of your project?

P-glycoprotein is a well-studied protein in humans, as it is particularly important in medicine. Also, this protein is a generally recognized marker of the activity level of the mechanism of multiple resistance to xenobiotics. However, for the hydrobionts of Lake Baikal, P-glycoprotein remains poorly understood, despite being an important element of the body’s protection from xenobiotics.

Our project is not only aimed at studying the features of P-glycoprotein but also offers a fundamentally new approach to risk assessment and monitoring of benthic ecosystems since until now the approach using the transfected cell line as a test system in environmental monitoring has not been applied. The proposed approach makes it possible to quantify the effects of potentially hazardous substances on the endemic organisms.

Can the project be replicated to other regions?

I think so. The testing of new technologies using transfected cell lines that express P-glycoprotein in the hydrobionts will subsequently allow applying these technologies to the rapid toxicity-assessment of potentially hazardous substances entering the lake’s waters, and predicting the effects of anthropogenic impact on Lake Baikal and other water bodies.

How long have you been doing research and why have you chosen the path to science?

I began to engage in serious scientific activity after graduating from the university when I got into the laboratory “Problems of Adaptation of Biosystems” of the Biology Research Institute of ISU. My path began ten years ago with the position of laboratory research assistant. During this time I was engaged in various projects and I can definitely say that science is magnetically attractive especially to a curious person, and having tried it once it is very difficult to abandon. Research is a continuous fascinating process of gaining knowledge, and each new question in this process is an incredible driving force that can easily get one to sampling at -30°C or transporting valuable samples to another continent.

Have you managed to lead the project before?

I already have an experience with several small projects. Before, I won several grants from the Russian Foundation for Basic Research for young scientists.

What do you see as your professional development?

First of all, I see my professional development in acquiring new skills and mastering new methods for implementing projects that are interesting to me, as well as in sharing the results with the world community. At the same time, I find it important to introduce obtained results into practical application.

Tell us about your team. What is the contribution of each member to the project? What is their motivation?

The project team includes Anna Nazarova and Julia Shirokova, which are two postgraduates of Irkutsk State University, and student Maria Krasnova. Each team member performs their role. Anna Nazarova has experience in obtaining and maintaining primary hemocyte cultures of the endemic Baikal amphipod species and has the skills to work with fluorescence and light microscopy. Julia and Maria are skilled in molecular biology.

Thus, the project team, assembled from a beautiful half of humanity, includes specialists both in the field of biotechnology and in the field of cell cultures. The whole team aims at gaining knowledge about the protective mechanisms of the unique Baikal organisms using modern methods and at the development of biotechnological research at the Institute of Biology at ISU.

In recent years, the authorities have been making large-scale and active efforts to improve Russian science, but this will be a long process of strengthening the country’s position in the global scientific and technological space. It seems difficult for many Russian scientists to adapt to the rapid development of science. In this regard, many data do not manage to reach publication but, as you know, this is the main result of scientist’s work. Additionally, Russian science lacks integration with the business but some interaction between these structures increases year by year. Facing bureaucratic problems or lacking more or less stable wages, young scientists follow the path of least resistance and move abroad, where they see clearer prospects for development and career.

How are the projects like yours funded? What are the sources of funding?

Biological projects can obtain funding from foundations such as the Russian Science Foundation, the Russian Foundation for Basic Research, Presidential Programs, etc. But the contests for young scientists are highly competitive there, and one should show perseverance when participating in various programs. Even if the application is not supported, it is always useful to read the review from the expert council.

How do you imagine the development of the Baikal natural territory, in what aspects?

Baikal natural territory is a huge national wealth. Its development is directly related to the protection of the lake and adjacent territories from the negative impact of anthropogenic, technogenic and natural factors. This includes rationing the tourist flow, reducing the discharge of pollutants into the water bodies of the Baikal natural territory, reducing the waste pollution, and finding a solution to acute issues of illegal logging and fires. Also, the development of state environmental monitoring to track and promptly take measures to eliminate environmental damage.

What do you personally do or would do to save the lake, in addition to scientific activity?

Since childhood, my parents taught me the most basic rules: do not leave trash after yourself, do not tear plants, and do not pour anything into the lake. As a teenager, I was a member of the Baikal Scout organization, where I first gained knowledge, including environmental education, and then I passed it on to younger participants. I take part in garbage collection campaigns on the shores of Lake Baikal, and without such campaigns I will always collect everything that I can take away.

When working with students in our laboratory, we consider it necessary to tell and show simple rules of behavior on the shores of the lake, neglecting which, you can cause serious damage to the ecosystem.

What, in your opinion, needs to be done to save Lake Baikal for posterity?

I believe that a systematic approach and the coordinated work of government officials, lawyers, environmentalists, and biologists are needed. It is joint, competent work that will lead to the solution of many acute problems. Undoubtedly, the constant awareness-raising activities by eco-activists both for children and adolescents, and for adults are also necessary.

But first of all, it is still the responsibility of each of us! No project and no allocated amount of money will help if a person does not eradicate their consumer attitude to nature and to our unique lake. And this is our home.

The phrase from Antoine de Saint Exupéry’s “The Little Prince” always comes to my mind: “When you finish washing and dressing each morning, then it’s time to clean your planet very carefully.”