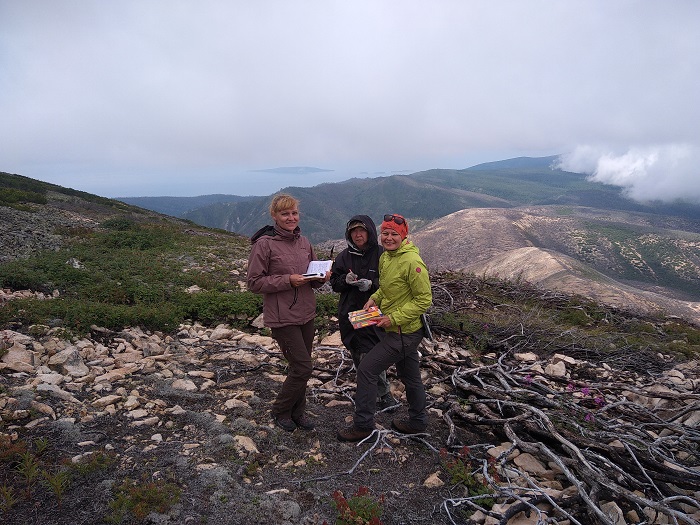 A complex expedition within the framework of the project «Educational tourism as a tool for nature complex conservation under conditions of pyrogenic and anthropogenic load» has recently been completed.

The research took place in the high-altitude part of the Svyatoy Nos Peninsula and for convenience was divided into three stages: preparation and exploration of the area in June, conducting comprehensive research in late July and early August and photographing distant areas on the forest border from a quadcopter in mid-August.

The purpose of this work is to analyze the opportunities and limitations of the development of educational tourism, namely, the arrangement of hiking trails and campsites.

It was important for scientists to assess the current impact of tourists on the flora and fauna and restoration of ecosystems after extensive wildfires in 2011 and 2015. More than 40 geobotanical and landscape descriptions were carried out at various points, an inventory of mammals (predators, mouse-like, ungulates) was made and five long-term monitoring sites were laid on burning areas and places where visitors congregate. Alexander Ploshko, volunteer of the project, experienced traveler and cartographer, assessed the possible path from the point of view of a potential tourist. In 10 days the scientists completed four routes with a total length of more than 50 km.

After processing the field data scenarios for the development of the area will be presented. According to preliminary results, the trail along the ridge can be extended by 13-15 km. Next year research is planned in the forest zone and access to the Serpent’s Bay.

The project «Educational tourism as a tool for nature complex conservation under conditions of pyrogenic and anthropogenic load» is being implemented with the support of Lake Baikal Foundation within the framework of the «Baikal Initiative» grant competition for young scientists.

You can watch Andrey Razuvaev’s video about the expedition via the link.