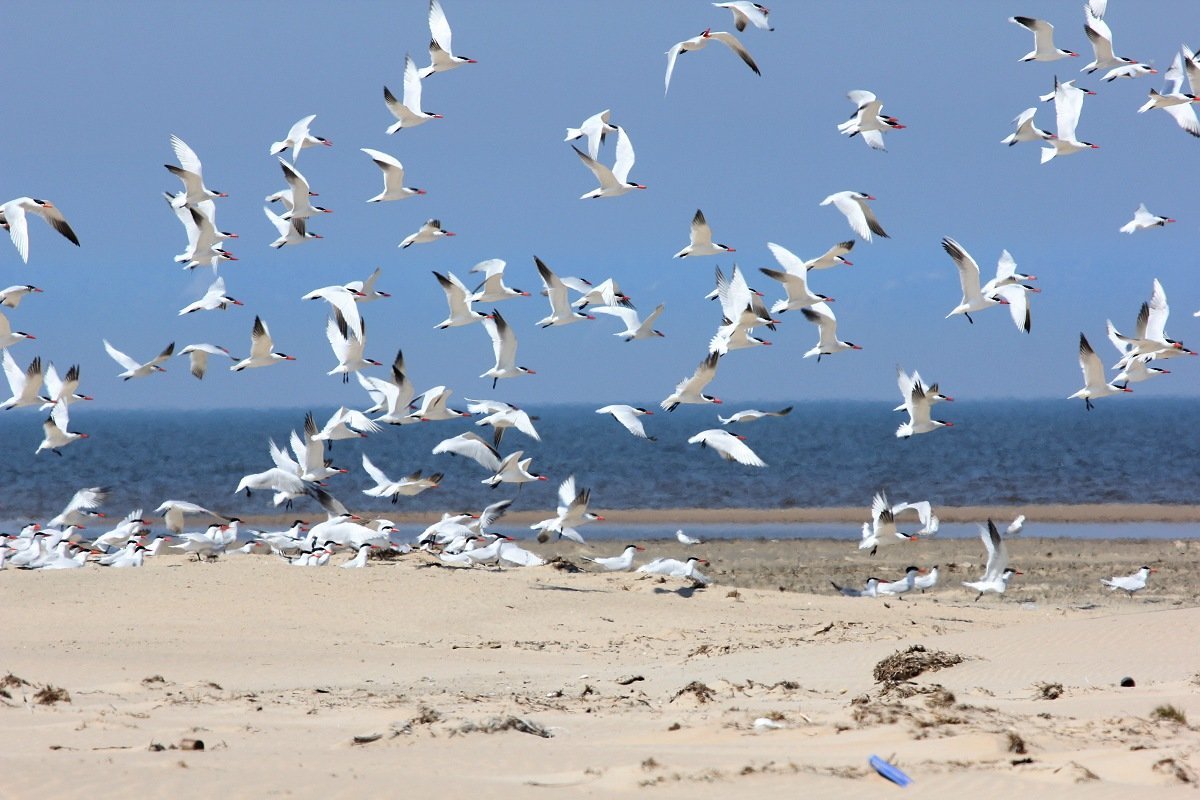 One of the winners of «Baikal Initiative» 2018-2019, the grant competition for young scientists, was the project on the water birds monitoring on Lake Baikal under the conditions of prolonged water shortage.

In summer-autumn 2019, a group of scientists under the leadership of Alexander Povarintsev, young specialist of the ISAU named after Ezhevsky, carried out the field investigation on the subject of the census of colonial and rare birds in the Kabansky reserve and in the Selenga River delta in cooperation with Baikal reserve. Overall, scientists overcame 486 kilometers of the accounted routes. The settlemets of colonial species were being mapped during the route survey, predominantly from the motor boats. An accounting of the breeding birds was conducted mainly in a remote way with the application of optical instruments; a full recount of nests and egg clutches was undertaken for specific controlling colonies.

39 colonies of water birds were found – Podicipediformes, Pelecaniformes, Ciconiiformes, and Laridae. The largest colonies of fish-eating birds in delta and Baikal were investigated: the great cormorant Phalacrocorax carbo – in the waterway Severnaya and the grey heron Ardea cinerea – in the waterway Shamanka. 5.4 thousands nests of Great Cormorant and 3180 breeding individuals of 12 species of colonial birds were counted. In autumn, a route accounting of water birds was conducted similarly to the mainstreaming of September 2018.  During the feeding period, the material on the nestlings’ nutrition of seagull and cormorant was collected.

Summarizing the results of the expedition, the scientists noted that the continued expansion of the great cormorant’s population was not recorded in the nesting places in the delta of Selenga river in 2019. The population’s growth in the nesting places was not noticed in the southern part of Baikal, on the colonies of Vega Gull Larus vegae mongolicus, in the area of Circum-Baikal railway.

A group of scientists also noted the impact of the water level on the population of the water birds. According to the monitoring data, in 2019, the tendency of the increased levels of Lake Baikal and Selenga river continued, which took place in the second half of 2018 after the period of prolonged water shortage. At the end of July and at the beginning of August 2019, high water occurred in Selenga river. In the long-term aspect, these changes were favorable for the water birds in general, primarly for their forage base. However, in 2018 and 2019, a high speed of the increase of water levels at the beginning and in the middle of the summer negatively affected on the results of nesting of a number of water birds’ species. In 2019, in particular, the settlements of the Caspian tern (Hydroprogne caspia) was flooded. It was figured out that the increased water supply in the delta of Selenga has not positively influenced the population of nesting waterfowls, as it should take some time for the changes of the habitat state to the more favorable direction.

The researches were conducted in 2018 and 2019 as a part of the Lake Baikal Foundation’s grant assistance on the competition «Baikal Initiative», that become possible due to the support of private donors and the Charitable foundation of Siberian Wellness – «The World Around You».

A two-year financing allowed making a number of comparable conclusions. Thus, in 2018, in autumn period the population of water birds was rather high – during the accounting the density was 306 species per 1 km2 in the area of wetland. Nevertheless, in 2019, the autumn population was two times lower due to the late mainstreaming and probably due to the summer dry and fires in the northern regions, from where the most waterfowls come, migrating through the delta.

In 2020 it is planned to continue the research as a part of international programme ICARUS. The data obtained at the end of 2019, specifying the number of population and clarifying the division of species, is important for the successful catching and tagging of the birds by the radio transmitters.