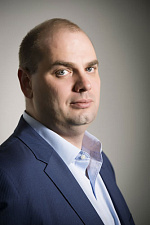 Chairman of Board of Directors at «Norvik Bank». Alexey Kordichev has been working in banking in Russia, New Zealand and Australia for more than 10 years. He joined the team of «Vostochny» bank in 2013 and became the Head of Department of Risks, in 2015 he made his way from First Deputy Board Chairman to Board Chairman of the bank; in 2017 he occupied a position of Board Chairman’s Counsellor. Previously Alexey was the Head of Credit Department of ZAO Bank Russky Standart, where was in charge of the Credit Center, indebtedness collection and subdivisions of underwriting and verification. Before that he worked in OAO AKB ROSBANK where he implemented and developed the systems of risk-management and scoring systems and took part in managing the projects in cooperation with Societe Generale. Alexey Kordichev graduated from Plekhanov Russian University of Economics as a specialist in Banking and Finance, he has the diplomas of Macquarie University (Australia) in Applied Finance and of Massey University (New Zealand) in Banking.