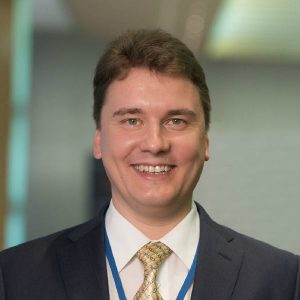 The President of Deafblind Support Foundation «Connection» since 2014. He was born in Moscow in 1975. In 2012-2013 he became First Deputy CEO of Russian Geographical Society. In 2007-2012 Dmitry worked in Сentral Electoral Committee of the party «United Russia». He took part in developing and implementing party projects including «Candidates pool – Professional team of the country». In 2012 D. Polikanov was among developers of concept documents and projects of «Open Government» system. He also is a member of Expert Council of Russian Government.

Dmitry has an experience of working in Social Insurance Fund of Russian Federation; All-Russian Public Opinion Research Center; International Committee of Red Cross; PIR-Center of Political Research. He wrote educational programs for MGIMO and RANEPA. He is the author of more than 100 publications in Russian and in foreign languages on international security, Russian foreign and domestic policy. He is a member of Social Council in Ministry of Public Health; a member of Scientific Council for development of the products for rehabilitation in Ministry of Industry and Trade; a member of «Golden Panda» club of WWF.

Dmitry Polikanov graduated from MGIMO University with honors in 1998, wrote his PhD there in 1999. In 2004 obtained an academic title of senior lecturer.